The Comet of Time and the Meaning of Life

You don’t need us to tell you that the world will never be the same. But do you understand the implications of the world’s changes in the light of Bible prophecy, and will you be able to enter into the new beginning that is dawning?

Our previous article sought to answer the question, Could the great new comet 2014 UN271 Bernardinelli-Bernstein be the sign of the Son of man? In pursuit of the answer, not only were many Bible prophecies found to support the idea, but the comet’s appearance in the constellation of the pendulum clock turned up some very interesting timing information, including a confirmation of the most important events of end-time Bible prophecy that have already transpired in recent years.

But if this comet is really the sign of the Son of man, then grave questions must be asked. How shall I respond!? How shall the church respond!? This soul-searching journey will take the reader through questions of life and death that will test the very essence of one’s character.

This article aims to deepen the understanding of the sign of the Son of man, which will be done by comparing the characteristics of the comet’s appearance in the clock to the outlook of future events that was provided in the epilogue of The Second Woe Has Passed, which itself is a consolidated presentation summarizing the overarching timelines of Bible prophecy.

To the lover of truth and defender of God’s honor, we extend this invitation to join us on the journey to discover the comet of time and the meaning of life.

Read more: The Comet of Time and the Meaning of Life

The Rod of Iron

As the clocks of the investigative judgment have come to an end, the Lord has sent a new and amazing sign of His wrath that is breaking forth upon the Babylonian world. Long patience has been exercised by Divinity…

“But they refused to hearken, and pulled away the shoulder, and stopped their ears, that they should not hear. Yea, they made their hearts as an adamant stone, lest they should hear the law, and the words which the Lord of hosts hath sent in his spirit by the former prophets: therefore came a great wrath from the Lord of hosts.” (Zechariah 7:11-12)

“And out of his mouth goeth a sharp sword, that with it he should smite the nations: and he shall rule them with a rod of iron: and he treadeth the winepress of the fierceness and wrath of Almighty God.” (Revelation 19:15)

The sign of God’s wrath takes the form of a comet that has appeared in a little-known but highly significant location in the sky: the Horologium constellation, which is pictured as a clock. Could this rare and extremely unlikely occurrence show that Jesus has taken off His priestly garments and clothed Himself with His kingly vesture to destroy the wicked? This would mean that He no longer stands in Orion as the Priest before the altar to intercede with His blood, but has come out of the temple in majesty to execute vengeance.

We are happy to reopen our websites once more to communicate what God has shown in the heavens regarding the rod of iron and Jesus’ new vesture as described in Revelation, and to offer some thoughts on how this surprising heavenly sign—full of biblical significance—can be understood in light of the trouble that is in the world today.

Read more: The Rod of Iron

The Second Woe Has Passed...

It was with joyful praise to the Lord that High Sabbath Adventists received the following multimedia presentation that was delivered on the momentous date of May 23, 2021, the full significance of which is revealed in the production itself. It includes the evidence that the everlasting covenant has been delivered by God the Father—who alone makes known the time of His Son’s return—to His children. The complete presentation, which is now being shared here for everyone who is interested, speaks for itself as to its purpose and meaning, so without further tedious words of introduction, please proceed to this finishing work that was done to the glory of God!

The Hand of God on the Sundial of Ahaz

In this follow-up to the video “Declaring the End from the Beginning” we solve the remaining aspects of the Berisheet Prophecy concerning the Great Millennial Week. Many more insights await those who continue to study the first word of the Bible!

At the Journey’s End

What does Elijah’s last journey have to do with Jesus walking on the water? In this video, you will learn how God is a God of order, and how you and a countless number of different and unique individuals can come into perfect synchrony with the Prime Mover of the universe.

You Will Be Vaxxed Unless You Know THIS

Your worst nightmare is to wake up one day and realize that you were vaccinated without your knowledge, and now you are a slave to Death forever. If you do not know what danger is around the corner and how to avoid it, that hellish fate will be yours. Watch this video! You have been warned!

The Ark of Time – Book

With the release of The Ark of Time, the writings of the White Cloud Farm are now complete. The days of the seventh angel, when he began to sound his trumpet, were chronicled in its pages as the mystery of God was being finished.

But in the days of the voice of the seventh angel, when he shall begin to sound, the mystery of God should be finished, as he hath declared to his servants the prophets. (Revelation 10:7)

In the culminating scenes of this period, the temple of God was opened in heaven and the glory of the Ark of the Covenant was seen.

And the temple of God was opened in heaven, and there was seen in his temple the ark of his testament: and there were lightnings, and voices, and thunderings, and an earthquake, and great hail. (Revelation 11:19)

In the four-volume set of the writings of the Last Countdown and the White Cloud Farm, the wisdom and mercy of God are interwoven with the experiences of His servants. Now the justice required of God’s broken law is being served to Babylon. Can you recognize whether you are still within its walls? Do you understand God’s revelation and how it applies to our day with clarity? When studied with the Holy Spirit, The Ark of Time contains just what you need to safely navigate these troubled times and arrive safely in the heavenly harbor. 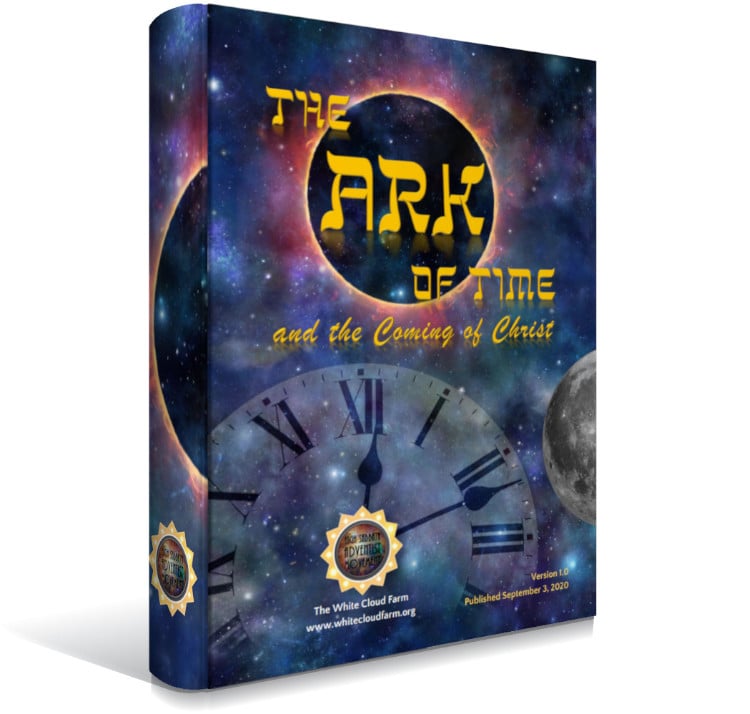 The Ark of Time and the Coming of Christ

Please be sure you also download our three other books so that you will have the whole light of the 4th angel offline!

Now that Russia has approved for use the first ever DNA vaccine for humans, which is to immunize the masses against COVID-19, common people are one step closer to facing the real-life decision of whether to get vaccinated for the novel coronavirus, and—for those who do not wish to get vaccinated—how to handle the situation if vaccination becomes a requirement of their employer or state or at any other level of society. This is an especially big concern for many who conscientiously object to this vaccination for various reasons, including questions over the safety of the vaccine, the ethics of its manufacture, the ethics of risking the modification of a person’s DNA, and whether or not COVID-19 is even a real enough threat to warrant it.

The focus of this epilogue to our series about Coronageddon, however, is on the specific issues that are of concern to the many Christians who see the coronavirus crisis as a fulfillment of Bible prophecy and the vaccination effort as the vehicle for implementing the mark of the beast. The difficulty one faces with this subject is that the available information on the topic is very fragmented and of questionable reliability, and although many passionate voices are sounding alarms, there is a significant lack of sound doctrine underpinning the messages that should contain the critical information necessary to prepare the people of God for the hour of temptation that is upon them.

What does the Bible really teach on this subject? Will receiving a coronavirus vaccine cause a Christian to lose his or her eternal life? Will avoiding the COVID-19 vaccine keep a person safe from receiving the seven last plagues? What is the most offensive thing in the world to God? Why did God destroy the antediluvian world with the flood? Does God’s Word reveal the genetic codes that the COVID-19 vaccine contains? Is there any way to ensure that one’s DNA is not altered by the vaccine? The answers to these questions are found in this article.

Reading material for self-study and distribution

The temple of God has been opened and the Ark of the Covenant seen. Download the book where the finishing of the mystery is chronicled.
Download book...
Climb the Holy Mountain of Time and walk the golden streets of the Holy City by reading our two most important books!
Get your copies now...
All our studies of the first seven years compact in a book in PDF format. A journey through the universe of God's time. A must-read for High Sabbath Adventists!
Download now...