The Bottomless Pit of Rome 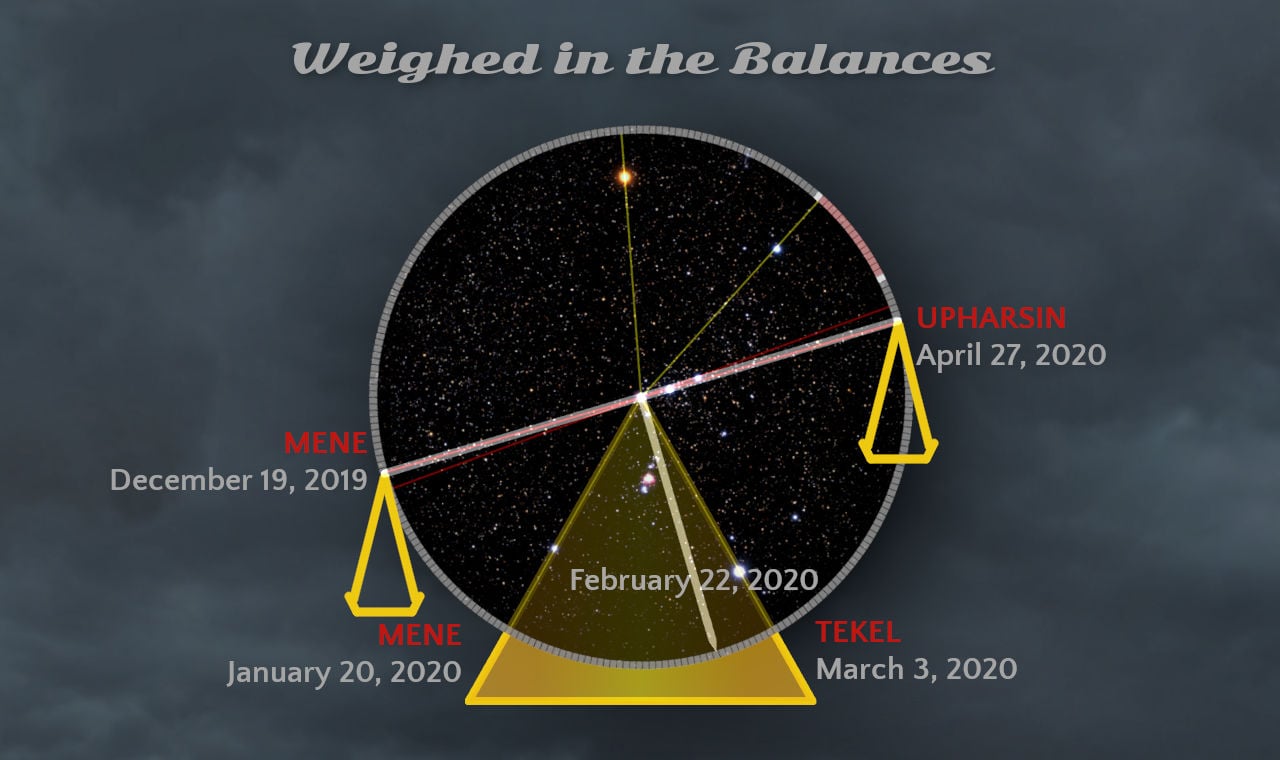 The Babylonian system was sentenced to be divided after being weighed in the balances on April 27 according to Jesus’ clock in Orion, and found “wanting”.[1] On the same day, a sinkhole opened in front of the Pantheon in Rome revealing 2000-year-old paving stones.[2] This is no insignificant event, considering the time and what the Pantheon represents. The appearing of this sinkhole is a strong warning from God. The sins of Babylon have come to God’s remembrance, and its division and destruction is imminent.[3]

A pantheon, as the name indicates in Greek, is a structure dedicated to all gods, and this sinkhole appeared at the most famous of them all—the Pantheon of Rome—just before the only true God said “It is done!” as recorded in the seventh plague of Revelation.[4] Having been converted into a church in the seventh century, this pagan pantheon is the equivalent to ecumenism representing an unbiblical ideology in direct conflict with the first commandment of the Law of God (not to mention the second through idolatry), and through this sinkhole event, He illustrates the danger of uniting with false religion, which will soon swallow up the worshipers into the bottomless pit. All the organized churches have fallen prey to this deceptive mindset, and thus every sincere child of God must stand apart and harken to the voice of Jesus calling:

Come out of her, my people, that ye be not partakers of her sins, and that ye receive not of her plagues. For her sins have reached unto heaven, and God hath remembered her iniquities. (Revelation 18:4-5)

In the vicinity of the Pantheon stands an Egyptian obelisk that was previously housed in the Temple of Ra and was taken to Rome, showing the relationship between Roman and Egyptian worship and contributing to the theme of ecumenism depicted in that small city square in Rome, Italy. What a clear contrast to what God says:

I am the Lord thy God, which have brought thee out of the land of Egypt, out of the house of bondage. Thou shalt have no other gods before me. (Exodus 20:2-3)

The plethora of gods to worship throughout different religions are inventions of Satan who craves worship for himself, the leader of the false gods, in any form. The only safeguard against falling into that open pit is to turn away from the lie of the all-inclusive mindset and “fear God, and keep his commandments.”[5] We serve a living God who “dwelleth not in temples made with hands,”[6] but who is a close, personal God, dwelling in His people through His Spirit.[7]

The Spirit is striving with men at this hour, and decisions are being made with eternal consequences as He contrasts truth and error for each individual. The knowledge of Time enables one to understand the spiritual significance of the events transpiring in the world. When a point is marked on His clock, one can be sure that His light will shine to give understanding of the schemes of Satan to protect His own from the quicksand of deception.

The opening up of this sinkhole also represents the uncovering of the evil deeds[8] of Babylon, for which she receives a double reward from the saints.[9] The Pantheon was converted into a Roman Catholic church and consecrated to the so-called holy virgin Mary and the martyrs on May 13[10] in the year AD 609. Marian worship is another of Satan’s counterfeits, and many people have been deceived on this point. Jesus, when Satan tempted Him to give him homage, countered with “It is written, Thou shalt worship the Lord thy God, and him only shalt thou serve.”[11] 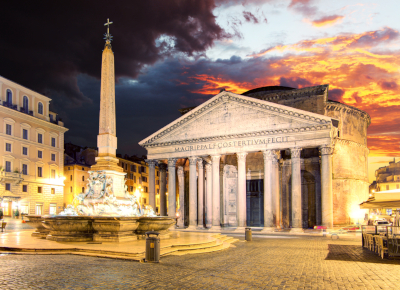 When this temple came into the church’s possession, the pope brought relics of martyrs to it and put them under an altar,[12] continuing the worship of idols, now as a pantheon of saints. Idolatry is a breach of the Ten Commandments,[13] and this is a prominent error in the Roman church. It is no wonder why all across Rome, there has been a sudden rise in the appearance of sinkholes like this.[14] The ancient Pagan foundations are being exposed like the original 2000-year-old pavement stones of the sinkhole. Furthermore, the church continued the atrocities against God’s pure remnant like the pagans, and thus united with them in guilt for the blood of the martyrs is also something for which this Babylonian system is beginning to receive its due reward, for “in her was found the blood of prophets, and of saints, and of all that were slain upon the earth.”[15] The precious souls that are seen crying out from under the altar in Revelation 6 asking “how long, O Lord, holy and true, dost thou not judge and avenge our blood on them that dwell on the earth?”[16] will soon be satisfied with the fulfilment of their plea. Even now, Babylon is filling the number of martyrs to the full as she continues in this coronavirus crisis to take people more righteous than her and rake them over the coals of civil discipline. But she will stain her garments with the blood of the saints through persecution and physical death for just a little while longer.

The gaping sinkhole serves as a reminder of the ultimate fate of all those who willingly choose to ignore God’s counsel for this hour. He is calling His people to be separate and to abandon all Babylonian confusion of doctrines and deeds, which are contrary to the “thus saith the Lord.” Will you take the hand of the I AM to hold you firmly so your feet will not slip into the pit of hell that is prepared for the devil and his angels?[17] The choice is yours!

1.
See the article Shelter in the Time of Storm to learn more about this theme. ↑
2.
Livescience.com – Sinkhole opens near the Pantheon, revealing 2,000-year-old Roman paving stones. ↑
3.
Revelation 18:5 – For her sins have reached unto heaven, and God hath remembered her iniquities. ↑
4.
Revelation 16:17 – and there came a great voice out of the temple of heaven, from the throne, saying, It is done. ↑
5.
Ecclesiastes 12:13-14 – Let us hear the conclusion of the whole matter: Fear God, and keep his commandments: for this is the whole duty of man. For God shall bring every work into judgment, with every secret thing, whether it be good, or whether it be evil. ↑
6.
Acts 17:24 – God that made the world and all things therein, seeing that he is Lord of heaven and earth, dwelleth not in temples made with hands; ↑
7.
Ephesians 2:22 – In whom ye also are builded together for an habitation of God through the Spirit. ↑
8.
As an example, read the chapter “The Bible and the French Revolution” from the book, The Great Controversy to remember a little of what God remembers concerning the St. Bartholomew’s Day massacre. ↑
9.
Revelation 18:6 – Reward her even as she rewarded you, and double unto her double according to her works: in the cup which she hath filled fill to her double. ↑
10.
This is the day when in 1916, three Catholic children famously first saw bright apparitions of one represented as Mary, remembered as Our Lady of Fatima, who gave them an apocalyptic prophecy. ↑
11.
Luke 4:8 – And Jesus answered and said unto him, Get thee behind me, Satan: for it is written, Thou shalt worship the Lord thy God, and him only shalt thou serve. ↑
12.
See the Wikipedia entry for the Pantheon. ↑
13.
Exodus 20:4-5 – Thou shalt not make unto thee any graven image, or any likeness of any thing that is in heaven above, or that is in the earth beneath, or that is in the water under the earth. Thou shalt not bow down thyself to them, nor serve them: for I the Lord thy God am a jealous God, visiting the iniquity of the fathers upon the children unto the third and fourth generation of them that hate me; ↑
14.
TheLocal.it – Why do sinkholes keep opening up in Rome? ↑
15.
Revelation 18:24 – And in her was found the blood of prophets, and of saints, and of all that were slain upon the earth. ↑
16.
Revelation 6:10 – And they cried with a loud voice, saying, How long, O Lord, holy and true, dost thou not judge and avenge our blood on them that dwell on the earth? ↑
17.
Matthew 25:41 – Then shall he say also unto them on the left hand, Depart from me, ye cursed, into everlasting fire, prepared for the devil and his angels: ↑
0
Shares