Two Moons on a Pendulum Clock

A spiritual phenomenon is anointing the Church to announce Christ’s return.

And it shall come to pass in the last days, saith God, I will pour out of my Spirit upon all flesh: and your sons and your daughters shall prophesy, and your young men shall see visions, and your old men shall dream dreams: (Acts 2:17)

God is fulfilling this word. Just as the Bible verse above separates the dreamers and visionaries into two groups, so He has elected two groups of Christians today: some to receive dreams or visions of “two moons,”[1] and others to receive visions or dreams of “clocks” telling the time of 10:10 or 10 till 2.[2]

If this phenomenon is of the Spirit, then we have reached the last days. Should we not understand the two moons together with the clock? Are they not one message? Could this be what the church has been called to watch for, to know the hour of her visitation?[3]

Where should one look for two such bodies? Ask your fellow Christians who are anointed with the Spirit: in the “clock” in the heavens that says 10:10 or 10 till 2, which is called the constellation Horologium (Latin for “Pendulum Clock”).[4]

Now put the two revelations of the Spirit together: Are there any clocks or watches with two moons? Yes, such an actual watch has been found by others[5] and is shown in the picture below. Will there be two shining rocky bodies—comets—in the Horologium constellation in the near future? Yes again! And compare their positions as they cross paths, like the two passing moons shown on the Swiss watch: 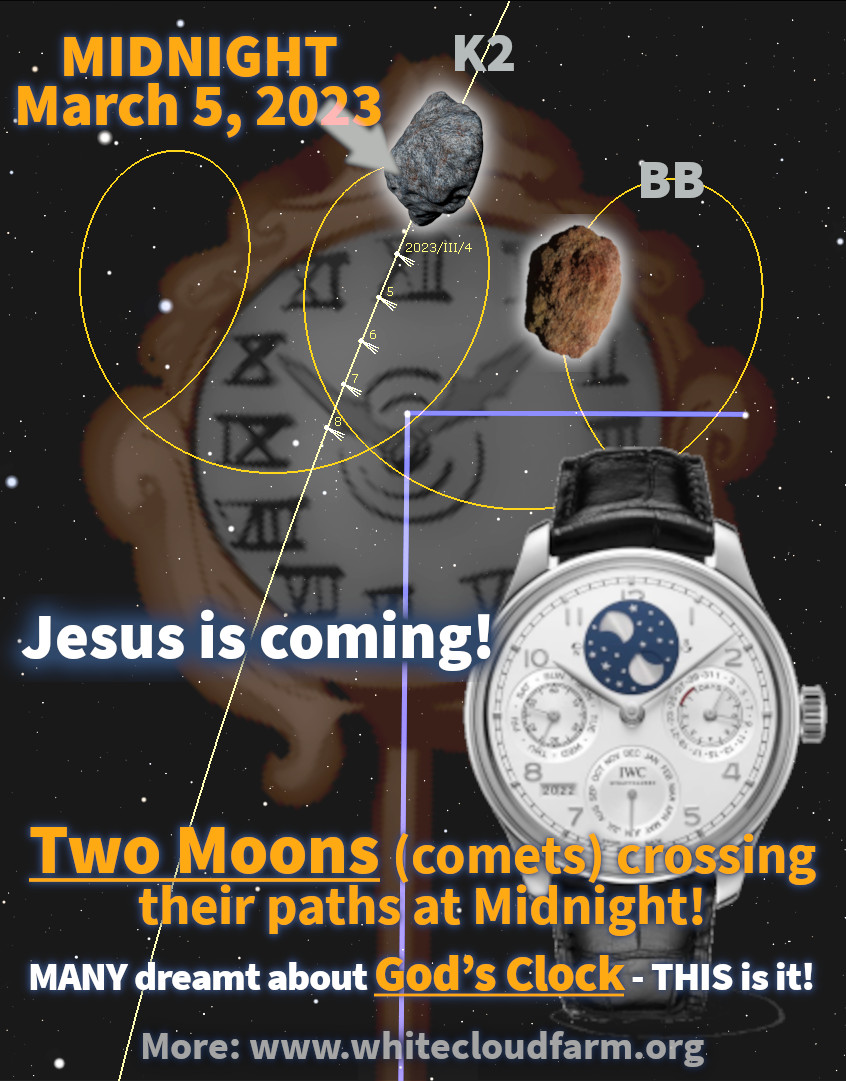 Comet C/2017 K2 (PanSTARRS) enters the clock face at the midnight hour shown on the clock dial. This alludes to the midnight cry of the parable of our Lord:

And at midnight there was a cry made, Behold, the bridegroom cometh; go ye out to meet him. (Matthew 25:6)

You are seeing (hearing) the voice giving the wake-up call! It’s time to get up and trim your lamps! Study your Bibles in connection with the voice of God from heaven!

Are you ready? The parable of the midnight cry indicates that two groups are now to rise and shine: the wise and the foolish—five and five—the prepared and the unprepared. It is time for them all to wake up:

Then all those virgins arose, and trimmed their lamps. (Matthew 25:7)

Isn’t it wonderful how God is leading through different people—those who dream of two moons, and those who see a clock in heaven? We at WhiteCloudFarm.org have been studying the comet(s) in the Horologium constellation for a long time, but we did not realize until recently that the whole Christian world has been receiving dreams and visions about these two different aspects of this amazing sign. Now we recognize what the dreamers and visionaries have received, and we hope this short article helps you to also put the two pieces of the puzzle together to recognize what the Spirit is saying.

May you be found among those who are wise, who can receive counsel, prepare, and go forth in the power of the Spirit to light the way for the coming of the Bridegroom, Jesus Christ.

And they that be wise shall shine as the brightness of the firmament; and they that turn many to righteousness as the stars for ever and ever. (Daniel 12:3)