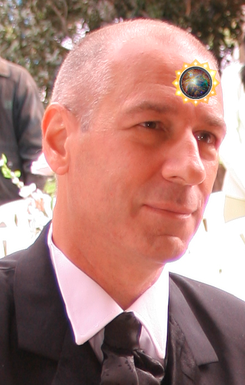 The author of these studies is just a Seventh-day Adventist by conviction and faith who studies the Bible and the Spirit of Prophecy. I do not consider myself to be a prophet. When I began these studies, I was still completely convinced that the SDA Church could never fall and would go through to the end, but I was very astonished about the horrible conditions in church—especially in the leadership. I just followed some hints from Ellen G. White regarding which chapters we should study carefully, but I didn’t know where these studies would lead me. As soon as I recognized that the seals and churches of Revelation are repeating according to the model of Jericho and that this must have something to do with the two World Wars, I started to investigate where the martyrs could have been in SDA history at the time of the World Wars. I read a lot of books about SDA history but could not find that anyone from the SDA church died for his faith at that time. I got the impression that there was something wrong, so I prayed even more intensely and asked God for clarification.

By 2005, I had found the year 2012 in the Bible as a year when something important would happen. [Later it became evident that this was the year of the beginning of the Judgment of the Living.] In the following years, I presented to the SDA church two other corresponding studies, which it never examined. Finally, I found the SDA Reform Movement on the Internet and was convinced that I had found the long sought martyrs there. Detailed studies about the history of the SDA Reform Movement (SDARM) confirmed my first impression in a clear and alarming manner. Personal visits to the SDARM in my country and travels to other countries visiting other SDARM projects further confirmed that here were a people who—in significant contrast to the SDAC—take the Commandments seriously and hold the doctrines of the pioneers. The testimonies of the brothers and sisters were impressive for my wife and me.

But of course there also arose some doubts and insecurities. The same happened to many of my SDA friends when I talked to them about my experiences. I asked God again to intervene  and to show me clearly the right way, and He carried and sustained me at that time. Therefore, I finally canceled my SDAC membership in October 2009, because I could no longer identify myself with the SDA Church Organization, which without doubt is in apostasy. Therefore, my wife and I started to prepare for re-baptism in the SDARM…

Although in 2007, I had already identified Orion as the seat of God and had recognized something like a "clock" that points to 2012 in the Throne Room vision, God was still holding His finger over these studies, which are now published on this web site. But in December 2009, on missionary travel to Brazil, the secret was revealed to me through the influence of the Holy Spirit and I received the inspiration for the Orion study. I did not have a clue what dates or messages would result, and it was also a total surprise to me that God showed me in such a clear manner what had happened to His church.

Shortly after completion of the first version, I presented the Orion study to the General Conference of the Reform Church. For months there was no answer. Then, my responsible pastor visited me and explained that my baptism could not take place, unless I would recant this "Orion heresy". In the name of the General Conference of the SDARM, he accused me of time setting, astrology, and playing the lottery.

Since I want to be faithful to my Lord and God, Jesus, I did not retract, but continued studying with my small group and published many more articles on the Internet. It became increasingly obvious why the Reform Church had also rejected the new light. Like many other groups, hey see themselves exclusively as the only church from which the 144,000 would emerge. Unfortunately, the studies reveal some great discrepancies in such special doctrines of some SDA groups, but I would like to ask the reader to evaluate it for himself.

I am publishing these studies as author knowing that they, although based on the doctrines of the Adventist church, are in no way supported by the General Conferences. It is “new light” which was predicted and will be made accessible by the Holy Spirit alone to those who will belong to the 144,000. Everyone is individually responsible to  study this new light for himself in prayer and to decide whether it is the truth.

These studies were prepared by a man who has lived in the countryside since 2004 like Ellen White counseled. He invests all his time and energy in the work of God. He tried to build a sanatorium that would use only natural healing methods and a missionary school in South America with his own modest financial resources. He and his wife are doing health work for the population of one of the poorest countries of South America without any financial interest.

In the course of the pages, the reader can see that I've realized that none of the three organized churches alone keeps all the truth of God's word, but that certain doctrines are represented only by a minority of pastors in the church. Therefore, I had decided to wait until the SDA Church would experience a collective repentance and corresponding forgiveness through Jesus, and then to congregate there again, if it would really happen and there would still be time. [Unfortunately, the opportunity passed and the Church did not take advantage of it.]

I am convinced that everyone who loves Jesus with all his heart and keeps all His commandments, even under persecution, will finally belong to the 144,000 who will give God’s final message to humanity with the Loud Cry.

Until the door of mercy was shut for the SDA Church on July 8, 2015, I was not giving a "call-out" message. I did not call anybody out from his SDA church. On the contrary, I said:

"I RECOMMEND THAT EVERYBODY STAY IN HIS CURRENT SDA CHURCH AND PREPARE HIS CHARACTER BY GIVING THIS ORION MESSAGE TO HIS BRETHREN AND LEADERS THAT THE CORRESPONDING CONGREGATION CAN BE CLEANSED OR THAT THIS COULD EVEN LEAD TO A REUNION OF ALL SDA CHURCHES IN PHILADELPHIA!"

Today I understand that the time has come when the 144,000, according to the prophecy of Revelation 14:4, cannot be part of any ecclesiastical organization [woman]. Nevertheless, I remain a Seventh-day Adventist with all of my heart without being a member of any of the apostate SDA organizations.

Several times I was asked why I would use a pen name and not publish my address and phone number or the like. I was likewise warned against legal problems because the site wouldn't have an imprint page and that it would diminish my credibility. I would like to explain it as follows:

Almost every member of the leadership of the SDAC and the SDARM up to the General Conferences already knows exactly who is behind the pen name "John Scotram" and that everything that I am willing to publish on the Internet about my home and my personal work is correct. Whether I'm credible, no one can conclude from an address or phone number, but everybody must prayerfully study the scriptures because God's Word is the only standard by which we must prove everything. Do not believe any man, but God alone!

Whether the Orion and the Vessel of Time are present truth, you can find out only through prayer and study, but I can assure you that I did not move the stars of Orion or place them where they are now, to make the years "fit", if you don't mind this humor. Neither do I believe that Satan is or was able to do that, but only the Creator, Jesus Christ. All of you can check the clocks by reading them for yourselves. The instructions can be found in the basic PowerPoint studies.

Nor did I determine the orbital periods of sun and moon that were the basis for the determination of the Jewish festivals. This was determined by the Creator alone, and He ordered the feasts so that at the end of time a message would show up for us. This message does not imply that we should begin keeping the festivals anew like the Jews. Indeed, we receive the profound understanding that we, as God's people, are fulfilling the feast days that were not fulfilled at Jesus' first coming. This ultimately means that we will proclaim the Sabbath with an unprecedented depth of understanding when the light of the Fourth Angel shines in us.

This site is entirely private and non-commercial, with no association or organization behind it, and it reflects only my studies and my personal interpretations of the Word of God, especially in regard to these extra keys that I discovered in the Orion constellation and in the astronomical fulfillment of the biblical feasts.

Now, I wish all God's blessings and the Holy Spirit in abundance for your studies!

Sincerely, your brother in faith,
John Scotram from Paraguay